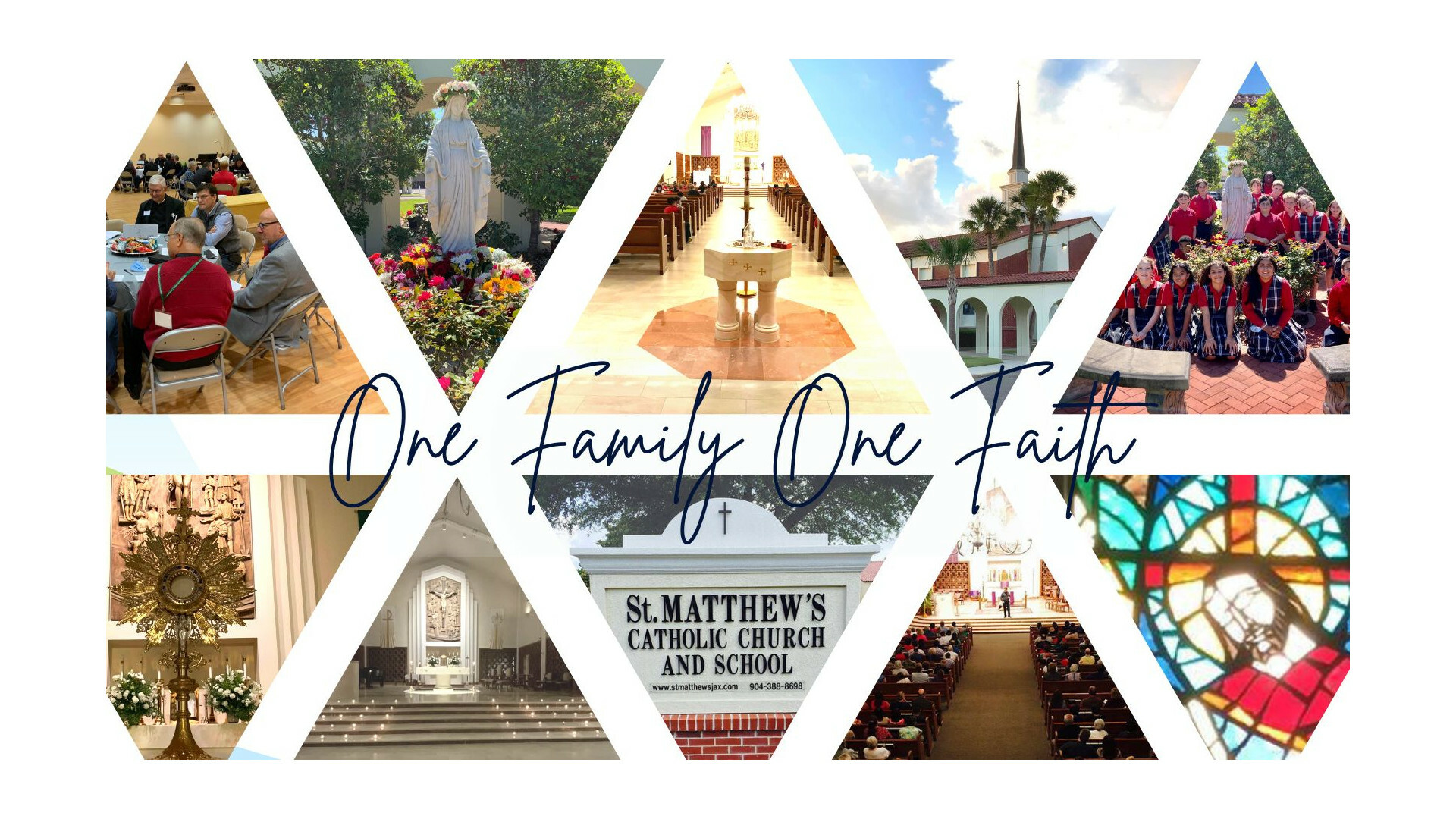 In the early 17th century the Spanish Mission of San Mateo (St. Matthew’s) was established by the Franciscans on what is now the site of Fort Caroline in Arlington. Three centuries later, in 1944, the Diocese of St. Augustine purchased the present site. St. Matthew’s Parish was founded on November 14, 1947. Father Joseph Corde organized the parish. Nearly 250 families were originally registered.

For the first two years the parishioners celebrated Mass in the Lake Shore Theater and the American Legion Hall. Their first church building came in 1948 when the old military chapel from Camp Blanding was moved in pieces to Blanding Blvd. The first Masses were offered there in April of 1949 for a community of 400 families. From 1950 to 1951, the Parish Hall (now kindergarten and lunch room), the first wing of the school, and the convent, were all constructed.

In 1953, Fr. Corde accepted a new assignment, leaving behind six years of labor and accomplishment. Fr. Paul Manning arrived as our new pastor. Shortly thereafter, a census was taken determining that the orginial frame of the church would not be able to accommodate the parish as St. Matthew’s flourished. By April of 1954, a campaign to raise $160,00 to build a larger church was launched. Unfortunately, Fr. Manning was beset with ill health, and in February of 1955 transferred to St. Petersburg. Bishop Thomas McDonough, while remaining Pastor of St. Paul’s in Jacksonville Beach, was appointed administrator to supervise the building of our present church.

Ground was broken on Christmas day, 1955. The following Christmas, 1956, the new church was dedicated to Archbishop Hurley. In February of 1957, Fr. Daniel Hegarty was appointed pastor.
As St. Matthew’s continued to grow, a new rectory was constructed in 1968, followed by our gymnasium in 1973. In 1980, Monsignor Hegarty celebrated his 23rd year at St. Matthew’s, and in his golden jubilee of ordination, he retired as pastor of St. Matthew’s. Monsignor John P. Burns was appointed the new pastor.

Upon his arrival, Msgr. Burns renovated the convent, installed 10 stained glass windows, and renovated the school. Bishop John Snyder dedicated and blessed the new windows in the church, and the renovations of the school, on the 35th anniversary of St. Matthew’s Church on November 18, 1984.

In January 1994, Bishop Snyder dedicated the newly renovated church. In July 1994 Monsignor John P. Burns retired after 14 years of faithful service to the people of St. Matthew’s. Fr. Luke McLoughlin was appointed pastor of St. Matthew’s in July 1994. A capital campaign was formed in 2005 to raise funds for a new parish hall. Ground was broken in early 2008 and construction began. In 2009, the Schiavone Parish Hall opened its doors and has since been a beautiful place for many parish and community events. Fr. Luke served faithfully for 17 years, until his retirement in 2011.

Fr. Jose Kulanthinal was appointed pastor in June of 2011. At present, our parish is home for nearly 1,000 families. We have established committees to help in the growth and care of our parish. These include a stewardship, finance, formation, and liturgy committee.